Building The Widelux: How To Widen And Stretch A 1978 Toyota Before Force-Feeding It A Powerstroke! 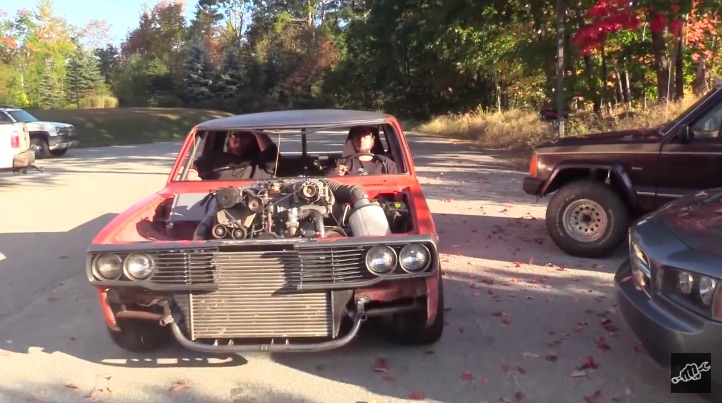 One of the most arresting vehicles that rolled into the first Holley Intergalactic Ford Fest last year was “Fat Erik” Stacey’s 1978 Toyota Hilux. It took a split-second before my brain immediately started looking around for Josh Mazerolle. If this Powerstroke-swapped Toyota didn’t echo Mazerolle’s own “Death Wish” wide-body LS-swapped Toyota, nothing did. I wasn’t disappointed…a few seconds later the trademark cowboy hat appeared. A tube-frame setup with Crown Victoria suspension and a 7.3L diesel that the remainder of the truck was fit around, the “Widelux”, as it was dubbed, was radical. Not just for a diesel-swapped Toyota that was packing nearly four times the displacement of the stock engine, but because of the whole truck was widened sixteen inches, and the cab was stretched three inches. They rolled into Ford Fest with Plexiglas for a windshield and rear wildow and no glass whatsoever in the doors. In October.

They autocrossed it. They drag raced it. They even put it into the burnout contest and onto the dyno to make some numbers. And in-between all of this fun, they answered questions left and right, because fans had plenty of them. It’s not uncommon to see a zero-f**ks given build show up at LS Fest. We’ve seen a twin-turbo, RWD converted Nissan Sentra there. But Ford Fest? Nothing against the Mustangs and the Mavericks and the other cool machines on the ground, but none had that same feeling. Not like this beastly little monster did.

Attacking A Water Park With A Fleet Of RC Cars, Trucks, And Boats Looks Like A Riot! Traxxas Gets To Have All The Fun! Anti-Camry: 1994 Toyota Mark II – Anyone Need A Four-Door Supra?