“This is the most expensive, most experimental, and nicest race car I’ve ever ordered”, he said as the nose of the Jerry Bickel Race Cars-built Camaro sat, nearly kissing the asphalt. It sat there in the sun, the Kryptonite Kustomz wrap shining and new. As Keith Haney bounced around the car with a smile you couldn’t chisel off of his face, an even bigger surprise was standing nearby, arms folded, with a look of pleased approval on his face. The car is the “Black Mamba” Camaro, Haney’s newest weapon for the dragstrip, and the other man is Pat Musi. If you don’t know that name, open up a new tab, and search “Musi+Firebird+Popeye”. We’ll wait.

Here’s the official rundown: The “Black Mamba” is going to fill in the roles that Haney’s two prior cars, the “Notorious” nitrous Pro Mod and “Enigma”, the radial Camaro, occupied. Two cars, two different setups, being replaced by one vehicle? Believe it, because that’s how the car was designed. Crew Chief Brandon Switzer had carte blanche to put in input with the folks at Jerry Bickel’s crew in order to create the perfect setup for Keith Haney Racing. Everything done has it’s purpose…the wrap job shaves the weight of a full paint job, the wiring system is an all-in-one MoTec system to reduce complexity, and the lump under the hood is all about the noise. Haney is pairing off with Pat Musi Racing Engines for the Black Mamba and will be using a nitrous-huffing 959ci hooked to a Lencodrive to get things going. Additionally, Haney will be partnering up with Jim Sackuvich, another Mid-West Pro Mod competitor, who will run a 1969 Camaro-bodied car with the same upgrades and design features that are incorporated into the Black Mamba.

There is no word on when the car will make it’s racing debut. After it’s appearance in St. Louis, the car was shipped to Switzer Dynamics for final tuning before the team tests the car out in private. “I mean, we’re so excited about the Black Mamba and to show Summit Racing Equipment and everybody else in the Mid-West Series what we can do,” Haney said. “And if I want to go over there and slap them around in PDRA, I can go out and do that, too. If I want to go down to Florida and run the big race, I can do that. If I want to put a set of radial tires on it, now that I’ve got the lightweight Jerry Bickel car and Pat Musi power, I’m as fast as anyone…anyone…out there.” 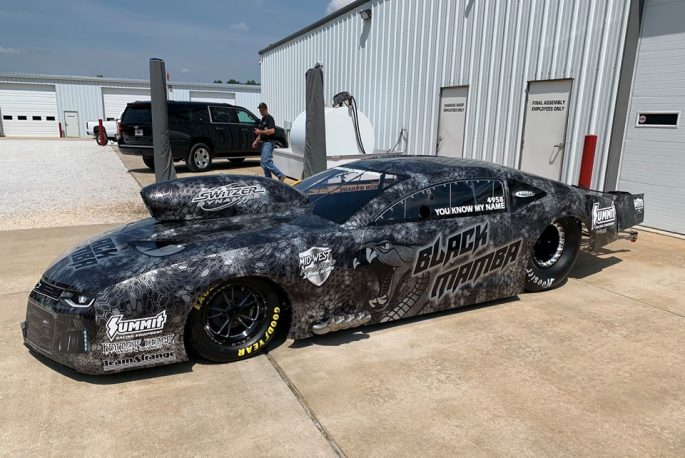