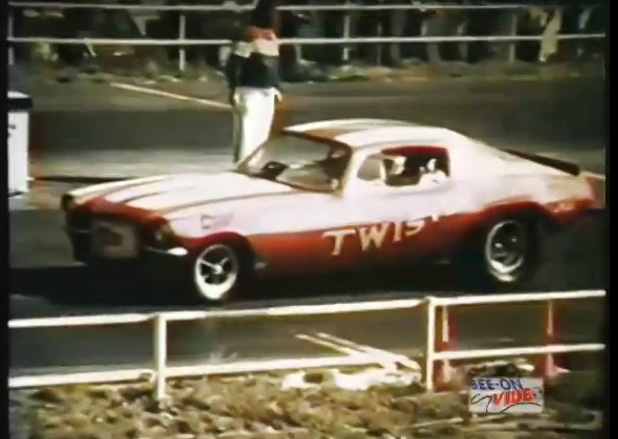 Today is fun day day here at BangShift! It’s the Fourth of July, it’s a couple days before the NHRA New England Nationals start and we’re maxin’ and relaxin’ around the BangShift east offices. Time for some vintage video!

We were tipped off to this video from New England Dragway in 1971 featuring a match race between the Rhode Island based Hill Brothers “Rapid Transit” Barracuda and the New York based “Super Twister Camaro” of  Joe Petruccelli. As you’ll see in the video, it was a tough day for the Hill Brothers as they barely got the car off the starting line over the course of the three run exhibition. It was the Super Twister that ruled the day and due to the fact that it was pretty much a one season wonder, it may have been the shining moment in the car’s short lived career as a nitro burner as according to the guys at 70sFunnyCars.com, it was sold off to become an alcohol funny car after the 1971 season.

The Hill Brothers car is another interesting study in how the cars of the era were pretty “fluid”, meaning that change was a constant. The Barracuda only stayed on the car for a season or two before it was updated to something more reflective of the time. By ’71 that old style Barracuda was looking long in the tooth, even though it was a couple seasons old, people expected funny cars to reflect what was rolling out of Detroit factories. The Hill Brothers raced through the 1970s in the New England region and we’re sure that one or more of their old bodies is out floating around somewhere. Heck, maybe someone has this Barracuda on their wall or in their rafters. Anyone?

This video is cool because the footage is nice and clear and Jim Amos does his usual killer job of applying sound where there originally wasn’t any and he dubs it so well you’d never really know. The cackle and thunder lines up seamlessly and we really dig that. The scenes from the pits of the cars being unloaded add to the fun and of course the look of New England Dragway long before it ever dreamed of hosting an NHRA National Event is one that drag racing fans in the northeast will gaze at fondly. This looks like it was a fun day at the drag races…at least for the Super Twister guys. The Hill Brothers were probably ready to push Rapid Transit off a bridge on the way home after struggling as they did.

PRESS PLAY BELOW FOR VINTAGE FUNNY CAR MATCH RACING FROM 1971 WITH SOUND AND ALL!