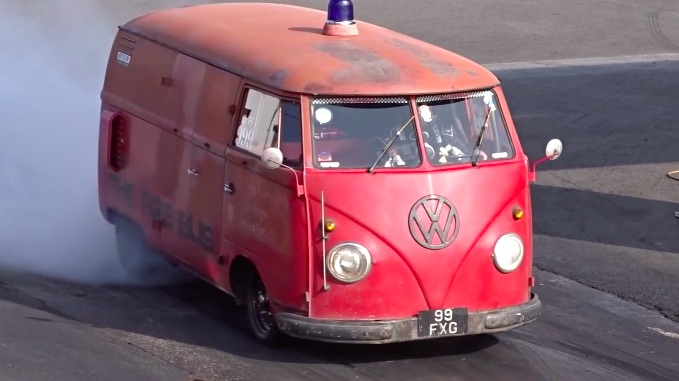 Having been surrounded by fast door slammers for the past month I can tell you that between turbos, nitrous,and blowers these days my heart may be actually favoring the nitrous guys. Not that I have somehow disliked nitrous or any other power adders for that fact but the reality is that I have certainly gained a lot of appreciation by watching what the nitrous guys are doing and how they are doing it. This video reinforces my crush by a factor of about 200x because it shows a ratty looking VW bus called The Fire Bus running at a VW event in England. Powered by a stretched out 2387cc air cooled engine that is spinning a manual transaxle, the driver sprays and shifts this thing to elapsed times in the 11.60s and speeds of over 115 mph. That is awesome!

The thing we really dig about The Fire Bus is the fact that the guy who is driving it can really wheel. There is no bogging, no excessive wheel spin, none of that. The driver has obviously launched this thing about a million times because it is smooth as silk and he nails all of his gear changes cleanly as well.

Would this thing be faster with turbos? Pound for pound, maybe but it would not be as cool. The way that stinger pipe screams and the great noise from that “big bore” engine would all be muffled and quieted down with a hairdryer or two. This van has been on a performance trend for a while. We found some older videos when the owner/driver was slower than he is now and it is always cool to see someone sticking with it to work their stuff to the absolute limit.

The video claims that at the time this was shot the van became the third quickest VW bus in the world. That’s an oddly hilarious stat but one that we approve of!

Watch The Super Twister Camaro Take On The Hill Brothers Rapid Transit Barracuda At New England Dragway In ’71 BangShift Daily Tune Up: The Star Spangled Banner – The Boston Crowd Takes This One Over