Credit to the team at KraussMaffei, a Munich-based systems supplier for injection molding, extrusion and reaction process technology—all things related to making things out of polymers—as the company is acknowledging a social reality and making sure that it addresses it.

That is, in announcing that it reorganized its various businesses under the single “KraussMaffei” brand and has created a new tagline to go along with its logo—“Pioneering Plastics”—the company, which has been in business since 1838, acknowledged that “the public is commenting negatively on plastics.” Environmental pushback. Yet there it is, drawing attention to its business. But it is doing it in a positive way, such as reemphasizing its commitment to recycling, upcycling and recompounding plastics. Frank Stieler, CEO of KraussMaffei, stated, “KraussMaffei is strongly committed to the circular economy and pursues environmental and social developments. We are aware of our responsibility when it comes to the environment and we are working on a number of projects to open up new business areas and partnerships with regard to recycling plastics.” It is not putting its head in the sand, nor is it pretending that the societal concern doesn’t exist.

At the K 2019 trade fair that will be held in Dusseldorf in October, for example, the company will be showing how polypropylene buckets, produced on its new GX 1100 injection molding machine, can be shredded and put back into the material circuit as regrind that is run through a ZE 28 BluePower twin-screw extruder from EdelweissCompounding. Pigments and a 20% proportion of talc are added to the polypropylene flakes, then after pelletizing and drying, the material is put in an all-electric PX 320 injection molding machine where it is formed into a panel for an A-pillar with an over-molded layer of fabric. 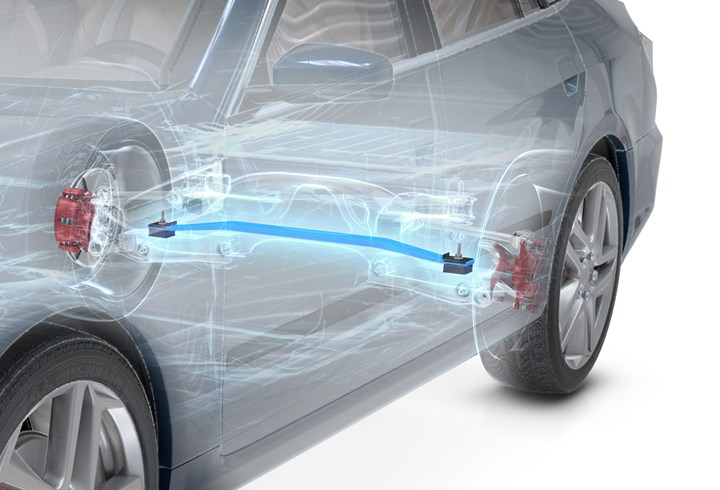 Another thing the company is emphasizing is a comparative advantage of plastics—in this case, fiber-reinforced. The materials are lighter than steel and less energy-intensive to produce than aluminum.

An example of an application of the composite material is a leaf spring for trucks and vans that has been developed for Hengrui Group. The component is produced with a high-pressure resin transfer molding process (HP-RTM). According to the company, it is 60% lighter than the previous steel spring.