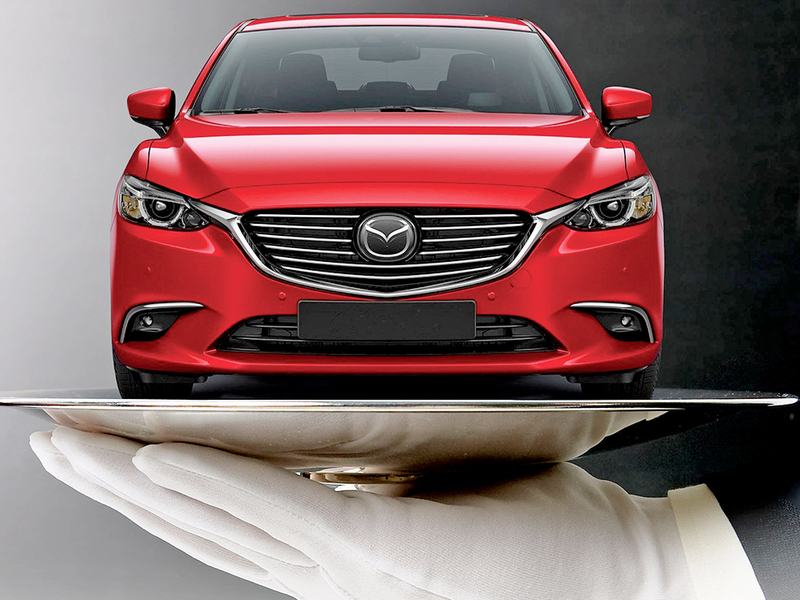 SAN JUAN CAPISTRANO, Calif. — Some days on his way to work, Miles Brandon lingers along the roundabout that takes him from Interstate 5 to the gleaming Mazda dealership he recently built here by the busy Southern California freeway.

“When I come to work in my Miata, I can do an extra lap if traffic is slow,” he said. “I’ve always loved the Mazda brand.”

Five years ago, when Brandon had the opportunity to add a Mazda store next to his Volkswagen dealership in San Juan Capistrano, he jumped at the chance, even though it meant building a premium facility to go with Mazda’s push to transition to a premium brand.

“When I started thinking about it, I saw the technology Mazda was putting in, the value they were putting in, and then I started hearing some of these rumblings about the direction they were going, and it all sounded good to me.”

The Retail Evolution facility — one of about 40 completed under a new Mazda program — exudes a luxury vibe and has been good for business, Brandon said. Sales are up 30 percent in the first five months of this year compared with the same period in 2017, when the Mazda dealership was housed in a temporary showroom that was torn down for the new facility. San Juan Capistrano is between San Diego and Los Angeles, where the I-5 meets the Pacific Coast Highway.

New- and used-vehicle sales at Mazda Capistrano this year reached 550 through May, Brandon said, compared with 423 vehicles in the same period in 2017. Comparisons to 2018 wouldn’t be fair because the facility was in transition, he added. “About a month or two after we opened the new facility, we had two people trade in BMWs on the same day. I don’t know if they would have walked into our old facility.”

As a brand, Mazda has been moving away from its focus on inexpensive performance — marketed since 2000 with the “Zoom-Zoom” tag line — to what it calls Mazda Premium under the latest “Feel Alive” slogan.

Analysts differ on whether a mainstream brand with a relatively long history in the U.S. can reshape itself as an alternative to luxury brands such as Infiniti, Acura and Audi. In the meantime, some dealers are hurting financially and asking for factory help.

A few dealers have sued Mazda over its facility program, saying it will drive up operating costs. One, Kuhn Mazda of Tampa, in Florida, settled with the automaker, according to a court filing in April. Terms were not made public. Kuhn Automotive Group no longer sells Mazdas, a representative said in an email.

Brandon, who sits on the Mazda National Dealer Advisory Council’s product committee and thinks Mazda is already more premium than some luxury brands, said the transition does come with challenges.

“I’m very impressed how there seems to be a really clear focus, so the long-term is really clear,” Brandon told Automotive News. But, he added, “You can’t drink the Kool-Aid too much because we still have to pay the bills today even if we’re excited about where we’re going.”

Going upscale is not an easy proposition for an Asian automaker known for value. Mazda argues that as a small brand, it’s better off finding a niche that commands better margins. It’s new Signature trims, for example, are lavishly appointed with nappa leather, genuine wood trim, heated and ventilated seats, alloy wheels and turbocharged engines in most models. A CX-5 Signature compact crossover stickers at $37,935, including shipping. Mazda says the trim has proved popular.

A harder sell, perhaps, is the new-generation Mazda3, a compact car that is the brand’s first ground-up product under its new design philosophy. Despite a price bump, it’s a hit — among car reviewers. The buying public, however, is more interested in crossovers, and Mazda’s new subcompact CX-30 won’t hit showrooms for several more months.

Mazda’s U.S. sales are down 16 percent in the first five months of the year — the sixth-largest decline of all brands — compared with 2.4 percent for the industry. Sales of every Mazda model fell by double-digit percentages. In 2018, Mazda sales rose 3.8 percent.

“I think their cars are great,” said Jessica Caldwell, executive director of industry analysis at Edmunds. “Everyone that drives them loves them in terms of the way they perform, the interior; they get really high marks.” But whether they can command higher prices is a different matter. “I think it is fairly tough for a brand to go upscale. That’s not to say it can’t be done. But I do think it’s quite challenging to change the brand perception — especially for one that has been around for such a long period of time.”

Leaving “Zoom-Zoom” behind means building the products, the facilities and the marketing to gradually pull the brand upmarket.

“I think it has to be a holistic strategy that everything has to change because I think the whole point of luxury is consumer touch points,” Caldwell said. “I think it is harder to change your brand and strategy in a market like this because there is a stronger importance placed on pricing.”

Brian Moody, executive editor of Autotrader, said Mazda has a shot at finding the right niche somewhere between mainstream and luxury in the automotive pecking order.

“There might be a place for them if they’re just under Acura,” Moody said. “I feel like they can do it, and here’s a good example: I feel that without them announcing it, Kia has kind of done that.” He cited Kia vehicles such as the Cadenza large sedan and the hot new Telluride large crossover as breaking into the near-luxury category.

“The thing that Mazda has done that’s really smart: They started building their Signature versions,” Moody said. “The best way to do that kind of thing is build cool products first, then craft a message. Don’t do it the other way around, like we’ve seen so many times.”

Moody thinks that even with Mazda’s modest resources, it can sell the new image. “I remember there being plenty of money to push ‘Zoom-Zoom’ on us. If they can have that money to spin a different message, I think they’ll be OK.”

Mazda said in a response to questions provided by Automotive News that it’s confident in its strategy.

“The U.S. is one of Mazda’s most important markets and we view our journey to premium as instrumental to our long-term success,” the company said in a statement. “Another crucial part of our brand transformation is the evolution of dealerships. Mazda’s Retail Evolution dealership design program provides dealers with an updated design direction, offering an enhanced experience to customers,” it added. “We’re optimistic in a successful transition to premium. It is already evident in the experience we are offering in our dealerships and the reception of our products by dealers, the media and — most importantly — our customers.”

Jim Bagan, a member of the dealer council who has been selling Mazdas for 32 years, said retailers strongly support the company’s long-term strategy, but they’re getting beat up in the market with a lack of deal-based advertising and sufficient incentives as they transition to the new brand image. Spiffs were down 23 percent through May to $2,743 per vehicle, according to Motor Intelligence Corp.

“I think probably the anxiety in the dealer body to a certain extent is the bridge that we are taking to the premium position. How does that look? How fast do we get there? And the actual transitional time we’re going through to that,” he said in an interview. “Candidly, the seventh-generation Mazda3 is our first real premium product introduction, and it’s been tough for us to gauge the success or failure of it because it’s in such a sliding segment right now.”

Bagan, co-owner of Roger Beasley Automotive Group, with three Mazda stores, said he has committed to the Retail Evolution upgrade that will cost around $2 million per store in the Austin, Texas, market. He took the plunge, in part, because of a Mazda program that helps offset the costs.

But he also told Mazda executives during a meeting that the dealer body needs more help making the transition to a premium future, through changes to the dealer incentive program and more product-driven marketing.

“Incentives do not have to be crazy. Incentives have to drive a value proposition to the consumers. Nobody in today’s environment wants to feel that they are paying window sticker,” he said. “The marketing, we definitely feel, has to be more product-driven and drive more down-funnel traffic to the dealerships … and that has to happen in the next 12 months. So, this time next year, if you and I are having the same conversation, we’re in trouble.”