Watch This Guy Bounce His Motorcycle Off The Rev Limiter Until It Explodes In Flames – What?! 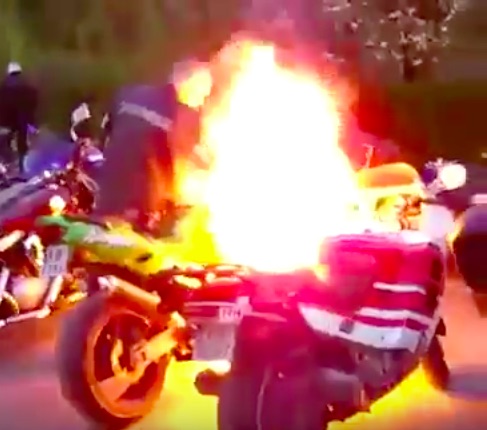 Watch the video below and then starting thinking about it. I guarantee as a gearhead your brain will start to fold over itself and spin inside your skull because what you are going to watch makes absolutely no sense at all. None. Makes not a damned bit and that’s because it is impossible to know what this guy was trying to accomplish. Was he trying to warm the bike up by essentially pinning the throttle wide open for about 20 seconds? He’s clearly looking at the gauges when he does this so there’s some sort of “data acquisition” being done.

We know people who are completely illiterate when it comes to things mechanical and they have done things out of ignorance that have broken cars, trucks, etc. Is this the situation here? Does this guy really have no idea what the heck he is doing and he just this that it is OK? “Hey, it makes this cool noise when the tach goes to 12 and won’t spin any higher, want to hear it?” For some reason we like that the motorcycle burst into flames rather than just shutting off after this abuse. It is way more fun to see the thing try to swallow him up in the inferno out of spite than it would be if the thing just started sounding like rocks in a tin can and quit running, right?

Lastly, is there anything more horrid than a motorcycle sitting still on the rev limiter? Racing motorcycles streaking by me at 200+ at the Ohio Mile? I am in! Guys throwing revs at each other at a stand still? I want to plug the mufflers with a thermite grenade.

Street Machine’s $2000 Challenge Is A Go! Which Car Works Better For The Broke, A Falcon Or A Holden?