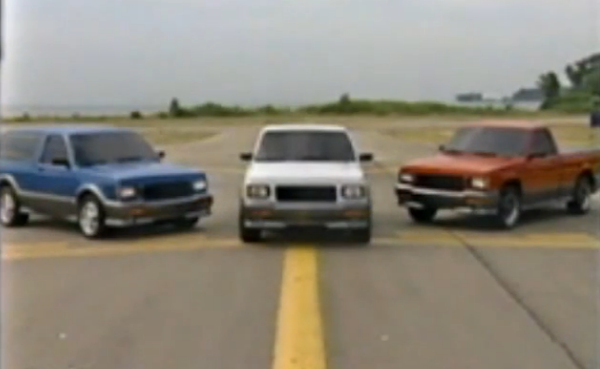 The GMC Syclone came out in 1991 and lasted for a single model year before being supplanted by the GMC Typhoon which was essentially the same vehicle with seating for four people. People were fully expecting that GMC would have a 1992 Syclone production run, hell GM seems like it was expecting to have a Syclone run in 1992 because they displayed the truck at auto shows and even produced promotional films like this six minute “tour” of the models that was supposed to drum up excitement and inform the public as to what these all wheel drive, turbocharged rockets were.

There were 2298 Syclones produced during 1991 and a mere three produced in 1992 before the plug was pulled. One such truck is shown in the video below. We’re guessing the other two were probably used a press vehicles and then who knows what happened to them after that. Hopefully at least one was mothballed for the sake of history. The Typhoons, produced in 1992 and 1993 numbered 4697 by the time their run was over. What made these so cool? There was nothing else like them in the world when they rolled out. The idea that GM would produce an all wheel drive, sport suspension tuned, turbocharged 4.3L V6 truck was so far off the radar people must have been in disbelief when these trucks were actually built.

They were and are fast as blazes. I have seen tuned up versions laying waste to almost everything that rolls up next to them at a drags, there are plenty of videos of the trucks hauling through autocross courses, and on the street you really shouldn’t try…trust us. Unless you’re packing something pretty serious, there’s no telling how wicked up the Syclone or Typhoon is and to get your ass handed to you by a 20 year old truck isn’t going to impress anyone.

As much as Nutting and I have been needling each other about 1980s stuff, both of us came to driving age at about the same time and while I have four years on him, we both love these things and lusted after them as kids. There was a small Pontiac/GMC dealer in my town and they had one of these trucks sitting in the show room. I drove by it with my parents about 1,000 times and had all the ludicrous kid fantasies we all have about cool, fast stuff at that age. When it was gone one day I was sad but this video rekindles all the feelings I had as a 12 year old, seeing and hearing about these trucks for nearly the first time.

PRESS PLAY BELOW TO SEE A PROMOTIONAL VIDEO FOR THE SYCLONE THAT NEVER WAS AND THE TYPHOON THAT WAS ACTUALLY SOLD!

In 1962 Fireball Roberts Raced In The 24 Hours Of Le Mans In A Ferrari 250 GTO, Won His Class And Finished Sixth Overall- Here’s How and Why Out Of This World: This 1973 Trans Am Is A Completely Bonkers Take On A 70’s Street Machine!