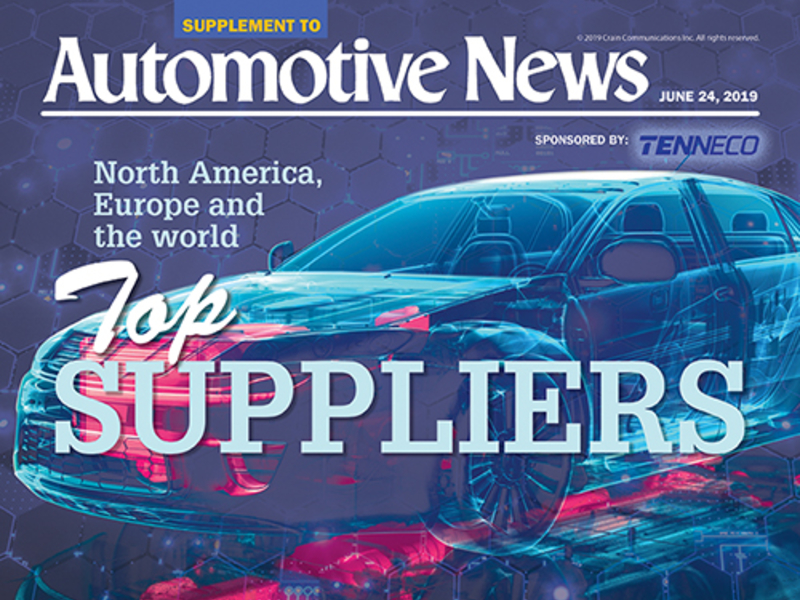 The supplier world is rushing into new technologies to deliver the grand vision of the auto industry – widespread electrified powertrains and advanced safety and convenience technologies that will allow vehicles to steer, accelerate and brake themselves.

But that transformation isn’t having any noticeable effect on the global pecking order of the industry’s biggest parts companies.

Not yet, at least.

The annual Automotive News ranking of the top global suppliers reveals that as the industry’s main players build revenue, transform and change direction, they remain in much the same order of size as they were a year ago.

Bosch, Denso, Magna, Continental and ZF Friedrichshafen remain the world’s five biggest suppliers, in the same order on the Automotive News list as a year ago. Only two of the top 10 – Valeo and Faurecia – changed rankings last year. They swapped positions on the list, with Faurecia No. 9 and Valeo No. 10.

The main reason suppliers, for the most part, are keeping their spots as the biggest of the big? Wealth.

The cost of playing in the game has gone up in the past few years, and only the biggest and richest can afford the rising costs of acquiring the technologies that will make the industry’s vision become a reality.

“You can’t buy anything related to autonomous vehicle software technology now that’s not in the billions of dollars,” said Dietmar Ostermann, U.S. automotive advisory leader at PwC, which tracks global automotive merger and acquisition activity globally. “So if you want to be in the autonomous game, the size of your company matters massively.”

Mergers and acquisitions have roiled the segment as suppliers jockey for a seat at the table to come.

Ostermann admits to being astonished at the amount of money that technology vendors are selling for in the world market, as big suppliers add to their portfolios. According to PwC, the combined value of supplier mergers and acquisitions has nearly tripled from a decade ago. It averaged around $20 billion a year for 10 years, Ostermann said. From 2014-17, it averaged about $50 billion to $60 billion, before jumping to  a record $97.5 billion last year.

“Technology is the dominating factor in supplier strategy,” he said. “A few years ago, suppliers were on an M&A drive because automakers were moving to global platforms with global architectures, and suppliers needed to quickly merge and create more global capabilities to supply in all regions.

“The real need now is to be able to support electric vehicles, connected cars and autonomous driving.”

The desire to beef up with connectivity and autonomous capabilities has triggered acquisitions for software companies and electronics innovators, small and large, in and out of the traditional car business.

Last year, there were 20 deals each worth more than $1 billion – twice the level of activity of the past three years. The sector recorded 903 merger-acquisitions during the year. Among those that reported a deal value, the average size was $286.8 million.

The quest for more technology is also focused on older auto parts. Even as EVs rise on the horizon, automakers are asking suppliers to help make internal combustion engines more competitive, smaller and lighter, requiring turbocharging and direct injection. The same lightweighting effort is driving opportunity among steel, aluminum and composite material suppliers.

Companies are questioning their past business segments and repositioning themselves for new roles through mergers, investments, divestitures and corporate restructurings – even if the technology revolution has not kicked in yet.

The expected revenue of that big future is little more than a trickle, compared with the still-robust demand for good old-fashioned brake pedals, pistons, fuel tanks, lead-acid batteries, transmissions and pickup bed liners.

But change is occurring nonetheless, and familiar names are disappearing from the list of giants as suppliers carve out new visions for their futures.

Delphi Automotive, a company that once towered as the industry’s biggest supplier under various corporate names, making parts as disparate as air conditioners, brakes and radios, now appears on the list of giants as Aptiv at No. 20. Aptiv plans to focus on electronic architectures and advanced safety. The spun-off part of the old Delphi – now named Delphi Technologies – will compete in the powertrain corner of the industry. It ranks No. 62.

Johnson Controls, once a star supplier of seating, interiors and batteries, has divided into separate companies – No. 13 Adient, with an eye on seats for the autonomous age; and Clarios, focused exclusively on the future of batteries. Clarios did not submit a completed survey for this year’s list.

Axle and transmission maker ZF, No. 5 on the list, grew mightier last year as a result of its 2015 acquisition of American safety systems supplier TRW.

And Japan’s Panasonic Corp., ranked No. 12, reported a 33 percent growth in revenue last year, thanks in part to its acquisition of the majority ownership of Ficosa, the fast-growing Spanish supplier of cables, mirrors and other parts.

The question hanging over the heads of supplier executives: When will the new order of electrification, connectivity and autonomous driving begin delivering revenue and profit on a par with the cost of restructurings, acquisitions and development investment?

Significant financial payback could be another decade away, according to several forecasts.

Although automakers ranging from Volkswagen to Toyota are rapidly developing electrified vehicle portfolios, most forecasts conclude that it will take until at least late in the next decade before electrified vehicles equal those powered by internal combustion engines in terms of global unit sales.

And while lower-level autonomous driving technologies are spilling into the marketplace – visible in Nissan, Cadillac, Tesla, Honda, Volvo and Mercedes-Benz vehicles – the new science remains a distant source of dominant supplier wealth. Automakers are still vague about when and where fully autonomous vehicles will appear in the market.

Until then, said Daron Gifford, strategy and automotive consulting leader at Plante Moran in Detroit, large suppliers will have to sort out the daily challenges of the auto business the same as small suppliers. Those include delivering flawless parts to customers on time, running their factories efficiently and meeting the cost reduction demands of automakers’ purchasing managers.

“But whether you’re big or small, you face the same issues.”