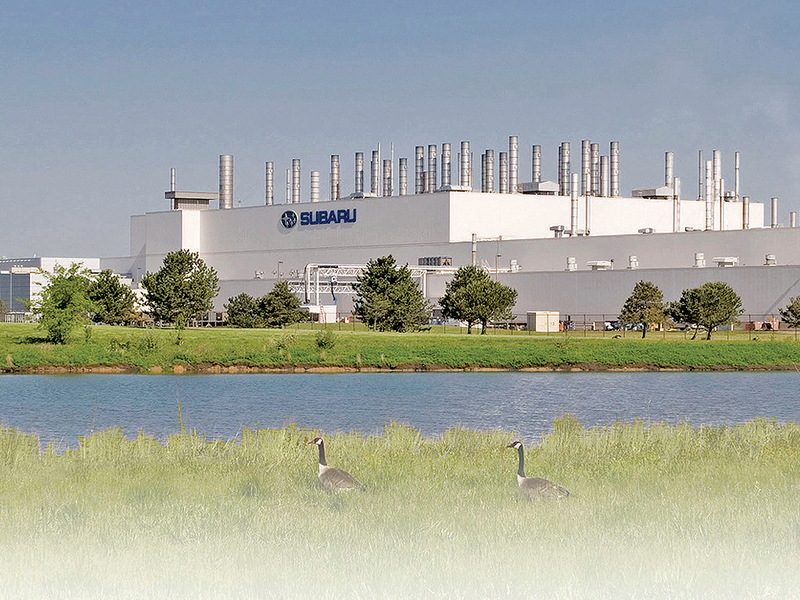 TOKYO — Stung by recalls and quality slips, Subaru is racing to fix problems from recent product launches so they won’t carry over and mar the critical launch of the next-generation Outback.

The hot-selling Japanese automaker is showing gains in some key areas, but the campaign to improve quality — a vexing issue at both its Japanese assembly plant and its American plant — is a work in progress, internal documents show.

Subaru is rushing to resolve lingering problems with North American suppliers and components as it prepares the redesigned Outback crossover, one of the brand’s most important nameplates. Part of the challenge is fixing glitches that cropped up during the launch of the Ascent last year.

Internal reports on the progress, obtained by Automotive News, indicate that nearly half of Subaru’s suppliers were recently operating at quality levels below Subaru’s internal target. To boost performance, Subaru is overhauling its own production processes and working with suppliers.

They also show plenty of finger-pointing, with blame being spread among factory workers, designers in Japan and parts suppliers.

Subaru is scrambling to get its house in order before the problems undermine the brand’s stellar public image. Indeed, despite an uptick in Subaru recalls, consumers keep clamoring for more of the brand’s vehicles. Subaru is on track for a remarkable 11th-straight year of record U.S. sales in 2019.

Subaru is now focused on earning, in 2020, the top spot in Consumer Reports‘ reliability ranking and escaping the lower ranks of J.D. Power’s Initial Quality Study, which is widely cited in auto advertising. Those goals were outlined in an internal report about Subaru of Indiana Automotive, the company’s manufacturing operations in Lafayette, Ind., issued in April by the company’s quality planning and management department.

In the closely watched Auto Reliability Survey from Consumer Reports, Subaru flourishes, finishing fourth in the fall 2018 report and second when the magazine updated the survey’s scores this spring. It wants to jump to No. 1 in 2020, the Subaru document says.

But in J.D. Power’s IQS report card, Subaru has consistently struggled. In 2018, it ranked fourth from the bottom in the industry, with 115 problems per 100 vehicles.

Subaru’s internal report said it wanted to “break out of the bottom” and improve to 101 problems in 2019, then move up to “middle ranking,” with 90 problems in 2020. But in the 2019 results, released last week, it finished seventh from the bottom, with 113 problems.

The internal reports don’t sugarcoat the scope of Subaru’s challenge.

Subaru declined to say whether the documents were authentic or comment on their contents. But a spokeswoman said in a statement that the company always aims for the highest levels of quality.
“We acknowledge that over the past year we had more recalls than Subaru would like,” the spokeswoman said. “We want there to be zero. But when faced with a quality problem, we have been able to move quickly to get ahead of issues that might affect our customers.”
An April report from the quality planning and management department said that, over the preceding year, the cumulative defect rate for the Impreza small car was twice Subaru’s internal target level. The defect rate with the Ascent crossover was also twice as high as the company’s internal goal.

The April report said that 70 percent of Subaru vehicles are the object of recalls or service campaigns within two years of being purchased. It said the permissible limit should be 10 percent.

Meanwhile, a June 5 report from the company’s ISO 9001 management review meeting, which benchmarks how the company is doing compared with quality standards laid forth by the International Organization for Standardization, partly blamed an influx of new workers for the drop in quality.

Subaru of Indiana Automotive’s “sense of teamwork and sense of process ownership has degraded with the growth experienced since 2015,” the report said, citing what it called “workforce instability” brought on by the rapid onboarding of new workers for the Outback start of production.

“This hinders our ability and previous strength to solve problems quickly,” it said.

The April Quality Improvement Committee report cited four areas of concern, identifying problems that arose during the Ascent launch that might carry over to the Outback crossover, an important cash cow for the brand.

At the time of the report, the Outback was scheduled to enter production in late summer. The issues included problems with brake noise, seat wrinkles, oil dilution and battery failure.

“SBR and SOA must move more quickly to address these items,” the report said, using the in-house abbreviations for the Subaru parent company and Subaru of America subsidiary.

“The carryover of poor quality into new model release must be prevented,” the April report continued. “One of SOA’s biggest concerns is with 2.4L Turbo engine oil dilution and or extensive smoking following cold engine start. This item is a carryover item from [quality monitoring team] but it seems only achieved SBR’s full attention recently.”

On the other hand, the report said, four other Ascent problems are on pace to be fixed before the launch of the Outback. They include failure of the continuously variable transmission, a problem with the front door-latch cable, seat fan noise and the loss of audio preset.

Subaru leveraged lessons from the Ascent to preempt some problems in the Outback.

The Subaru spokeswoman defended the Ascent as an “extremely successful launch” and a vehicle with “high standards of quality and reliability.”

She added that the company makes improvements with each vehicle introduction.

“We learn from every vehicle launch and use what we learn to be a better car company,” she said. “Our goal is to launch every vehicle with highest standards of safety, reliability and quality.”

But Subaru of America turned some of the blame for the glitches back to the engineers in Japan who developed the vehicles. The April Quality Improvement Committee report cited more design issues than failures in American manufacturing.

“In defense of SIA,” it said of the U.S. manufacturing company, “SOA believes that all the listed concerns have design related conditions.

“The majority are conditions that SOA believes should have been identified during development and pre-production confirmation testing,” it said.

Other problems were rooted in rapid turnover of factory workers and an influx of new workers, Subaru said. Delays in implementing solutions for known problems were also cited. A problem with opening the rear gate of the Forester was found during the July 2018 start of production in Japan, but as of April 1, Subaru had still not implemented a countermeasure.

In another case, a fuel injector leak was discovered by Subaru’s internal quality monitoring team in March 2017. But a fix was introduced only in December 2018.

In supplier-involved recalls and service campaigns, the root cause was traced to development and design 60 percent of the time, the company’s report said. That has triggered a push to reinforce quality improvement efforts upstream of development.

The June 5 report painted a mixed picture of Subaru’s local supply chain. In each month of the fiscal year that ended March 31, 2019, suppliers missed Subaru’s target average defective part rate. The target, measured in parts per million is 6 ppm or less. In four of the months, the average stood at 20 ppm or higher.

Some 107 suppliers met Subaru’s internal quality goal for average defective part rate in the last fiscal year. But 101 others didn’t, and 32 of those had an average rate over 50 ppm.

“A small group of suppliers have a large impact,” the report concluded.

Subaru’s internal scoreboard of overall supplier performance was improved from the previous fiscal year across eight categories, including chassis systems, engines, interior parts and stamping. But the overall performance had declined from two years earlier in all categories but one.

Among the requested improvements by Subaru’s local quality monitoring team was greater leeway to make countermeasure decisions without having to wait for Japan to sign off.

“Decisions should be made and not need overseas final approval,” the report said, adding that exceptions should be reserved for issues related to safety and government regulations.

It also recommended changes to the design manufacturing process to bake in quality improvements, rather than just relying on additional inspections and retraining on old processes.