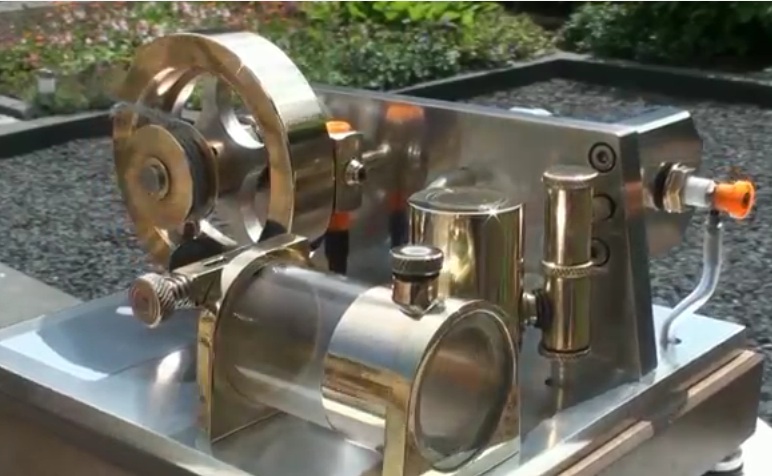 It would be cool enough to see this little two stroke engine run on a table top or something but it is 100% more interesting when you can literally watch the piston zip up and down in the cylinder and see the combustion process happen with your own two eyes. Yes, this engine has a glass cylinder bore and because of that, you can literally see what happened in the cylinder when the spark plug fires and the fuel is ignited. In this case the fuel appears to be Coleman lamp oil, but it all works the same way your dirt bike, chainsaw, or weed whacker might.

The engine was designed by a guy named Ridders but it was built by another man in the Netherlands. Each piece is polished to a mirror finish and the machine work/craftsmanship is really something else. It starts with a simple pull cord, uses a very simple system to trigger the spark plug and is basically a study in the minimalist approach to engines that the turn of the 20th century was all about.

We could go on for hours about this thing but we’re not going to. Instead we are going to direct you to press play below to see this film and get all the info on the mill. Outside of just watching it run, you get a look at each of the major components and every angle of the engine. The quality and the overall finish of the piece will blow you away much as it did us.

Yes, going with a two stroke is simpler than a four stroke for a myriad of reasons but the beauty of the simplicity is shown off here. This is a great little piece!