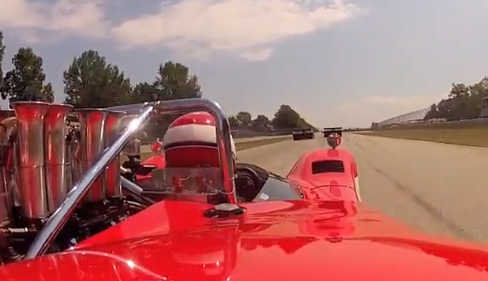 You’ve been seeing the driving talent of Jim Pace highlighted on the pages of BangShift for some time now as we’ve pretty much adopted Jim as our “dude” in the world of awesome vintage road racing. This video is more proof that we’ve hitched our wagon to the right guy. In the footage below, you’ll literally ride on and in the historic McLaren M6B that Pace is driving which is equipped with a Lucas fuel injected small block making somewhere around 720hp. During this qualifying race Pace works his tail off to try and catch the 1,000hp McLaren M8E and the equally as powerful Shadown DN-4 which was once raced by George Follmer back in the day. Craig Bennett is driving the Shadow in this video and Roger Williams is at the tiller of the McLaren M8E. We’ve heard from reliable sources that these fellows, like our man Jim, have some serious talent. They’d have to to hang onto those cars which make the power of drag race machines, wrapped in the best tech that the late 1960s and early 1970s had to offer.

This video includes a camera that was mounted in the footbox of the car and it shows exactly the tap dance that goes on to haul this car down from terminal speeds of over 180mph on the course into the challenging bends of Road America. At some points you’ll see Jim’s feet moving so quickly that it seems he’s grown a third one! You’ll also seem him trying to force the throttle pedal through the floor boards over the last couple of laps as he reels in one of the above mentioned cars, despite his being “down on power” to them. Make no mistake, this monster is laying rubber out of every corner but it is clear in the early going that Pace is at a big disadvantage on the straights. The other dudes walk him handily, but Pace came up with a plan and damn if it didn’t actually work.

This 7-minutes in gear banging, screaming, Can Am heaven was taken during an event called, “The Hawk with Brian Redman”. One of the biggest vintage events at Road America, this baby drew tons of cars and lots of spectators as well. The Can Am cars were the featured act of the weekend and seeing as though you’re watching qualifying footage below, the actual race must have bordered on the epic.

Heritage Motorsports does the prep on the car, which is an awesomely historic piece on its own. The car is the famed “#54” that was raced by Oscar Koveleski. Oscar founded “Auto World” in 1958 and he grew to become one of the great magnate’s of slot cars, radio controlled cars, and model cars in the world. Guys still talk about pouring over the Auto World catalogs today and his race cars were an integral part of the company’s program. He was one of the driving forces in getting Can Am off the ground and one of the series’ most loved drivers. He was at the event, hanging with the car. Which rules, like everything else about this video.