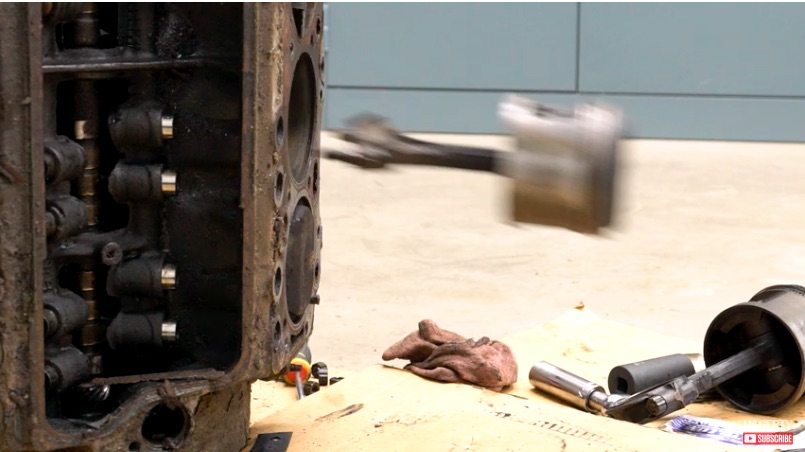 We LOVE the Hagerty Redline Rebuild videos and we especially love the fact that they do not shy away form showing all the details that surround the seemingly magical engine teardown and reassembly films. There’s a load of work that goes into not just shooting them but also actually doing the work.

As we told you about a couple of weeks ago, the next engine up is a Buick Nailhead V8 and the engine that the crew started with was absolute and total junk. The pistons all had to be hammered out and the heads were so banged up that they decided enough was enough and that they would start a new search for a base engine for the build. Well, that new engine arrived and the disassembly process began…with a hammer.

Thankfully while this one had ridge in the cylinders, it did not have multiple cracks or other major flaws like the other engine did. If they had proceeded with the original piece it would have been like the old great-grandfather’s hammer joke. “Yes, this is my great grandfather’s hammer. It has a new handle and the head has been replaced but this is his!” With this more willing candidate we’re hoping that the Hagerty squad can get the build going and we can all benefit from seeing the low-rpm, torque making V8 back in its former glory!

The neatest part about this series for us is the fact that they really have worked hard to do stuff that was compelling. Old and early hemi engines, flatheads, VW stuff, and on and on. It is not just Ford and Chevy small block stuff (which there’s no problem with) but it is fun to see the guts of engine that you have never been that deep into before.

Mission Troll: The Car Bros Are Trying To Get Their Fierri To Monterey Car Week – Want To Help? RacingJunk: This Dual Quad Intake And Carb Setup For A 1967 428 Shelby Mustang Has Never Been Out Of The Box!