A Look Inside: This 710ci Goodwin Hemi Has Neato Clear Valve Covers! 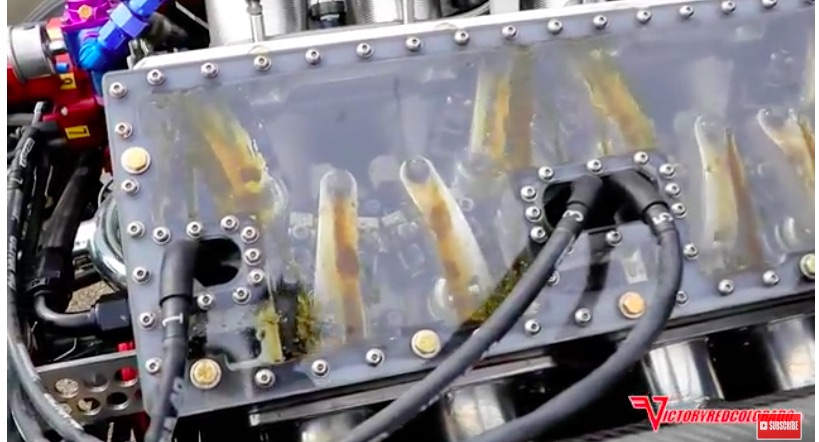 In so many ways, racing is about the details. When we’re on the topic of drag racing it’s doubly true. We all have our favorite classes and cars, but when you get a little bit below the surface, many of them have similarities. Pro Mods virtually all have very similar chassis and even the engine combos are pretty well established at this point, so how does someone actually differentiate themselves and be unique?

For Kucia racing, they run a cool Duster body of which were aren’t many of them. Then you stuff it with a 710ci Goodwin Competition Hemi engine, which is not that common in drag racing, and finally you top it off with custom, bad ass, clear valve covers!

It actually took us half a second to realize that the spark plug wires actually do pass through the valve covers like they should. The wires are so big and the neat bulkheads that the guys made look so professional they almost look like vacuum lines or something other than spark plug wires. Watching the big engine idle and seeing both the size of the valve train components and the volume of oil moving as the thing is warming up kind of rules. It would be beyond bad ass to get a GoPro under the hood with a shot of that valve train and oiling system working at full bore. It would look like a geyser under there!

This car runs in the 6-second zone at right around 200mph. We’re guessing that the guys are working on their tuneup and there could be more left in this killer car. Clean as a whistle, different from the rest, and a hustler, we’re kind of in love with this thing. Listen to Al Tucci make the call during the runs captured at Cordova. Cool stuff from the VictoryRedColorado YouTube channel!

Mission Troll: The Car Bros Are Trying To Get Their Fierri To Monterey Car Week – Want To Help?