It Got Real Quick: Watch This Insane Wreck From The 24 Hours of Lemons Race In New Jersey! 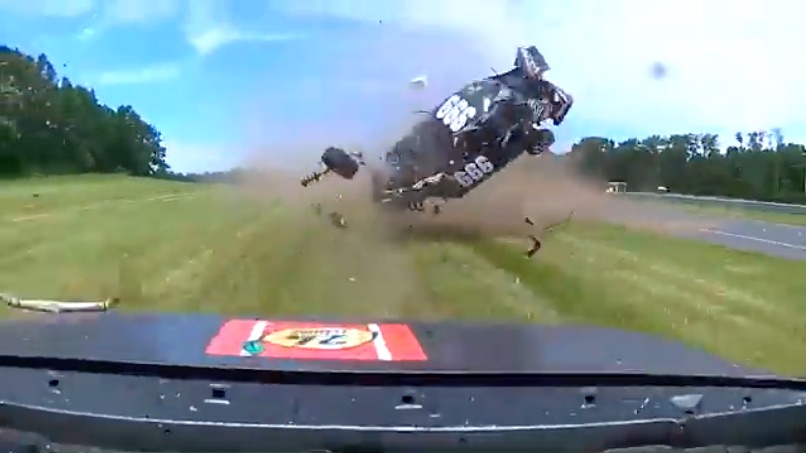 One of the things that budget car racing series like the 24 Hours of Lemons keeps really close tabs on is the safety equipment required in competition cars. Some people have issues with this because they claim that it makes things “too expensive” for competition, well watch this video and see if that argument holds water. You are going to watch one of the most spectacular wrecks in the history of the series and from all that we have read, the driver in that BMW walked away.

See, racing is racing and whether you are there under the pretense of being a professional or there under the pretense of hanging out with your boys and putting the spurs to some old crummy car that you bought and hot rodded on the cheap, physics doesn’t care. If the stuff hits the fan you need to be protected and the driver of the BMW was. If not there would be some ugly headlines following this mess.

The video is shot from two angles the first one you will see is rearward facing and the second is forward facing. Both present some spectacular footage. From the rear we hear some contact, see some dirt and stuff fly, and then out of nowhere the BMW comes rolling (literally) into the frame. From the front we can see that the BMW driver basically barrel rolled over the camera car we are riding on. The driver got a front row seat to his own mortality on that one!

We have seen different angles and from what we can tell, the driver in the BMW was the faster of the three cars involved in this. While running down a straight at New Jersey Motorsports Park, he went to pass two slower cars that were on the inside and outside of the course. In the course of the pass, he got pinched in, made contact with the camera car, got into the grass, and then the hell started.

You can see things like the coil over springs flaying out from under the car, the driveshaft, etc. This one was as violent as they come and the driver walked away. Whew….

BangShift Question Of The Day: What Was The First Song You Listened To After Getting Your Driver’s License And Driving Alone? This Barn Find 1914 Model T Touring Car Is An Incredible Glimpse Into The Past