The Slick Shift: Watch This Guy Pull 15 Gears In A Twin-Stick Mack Like A Boss! 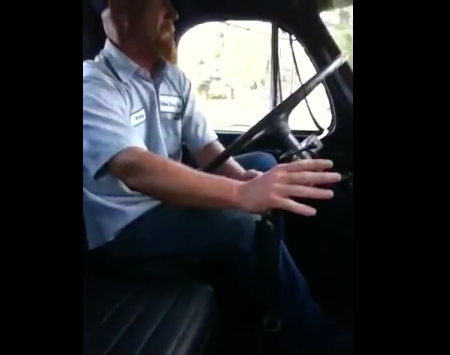 We have showed lots of multi-stick transmission videos over the years here at BangShift during our Friday Parting Shift items but this one is among the more impressive. Why? Not the fact that this driver manages to catch all the gears (several with one hand through the wheel!) but the fact that he catches them in such a clean and slick way. The guy knows this Mack Triplex transmission like the bad of his hand and frankly the rest of his classic B61 looks pretty awesome as well.

Mack had a bunch of transmissions over the year but the duplex, triplex, and quadruplex are the most well known. One lever is the actual gear changer and the other one splits the gear or puts the transmission into direct drive. The guys that drove these trucks with no power steering, these wild transmissions, and none of the creature comforts of today’s truckers were men among men that is for sure. We’re not taking anything away from the work that today’s modern truckers do, but event they would have to admit that this would have been one heck of a gnarly job to be cranking on that wheel and these sticks day in and day out back then.

Enjoy the sights and sounds of classic Mack action. Thermodyne power under the hood and the triplex under the cab. How cool?!

Press play below to see this guy own 15 speeds like a boss!

This Video Featuring Big Rigs Doing Wheelies For Four Minutes Is The Best Thing You Will See All Day Quick Tech: Keep Your Older Fuel System Happy With A Tip From Uncle Tony!