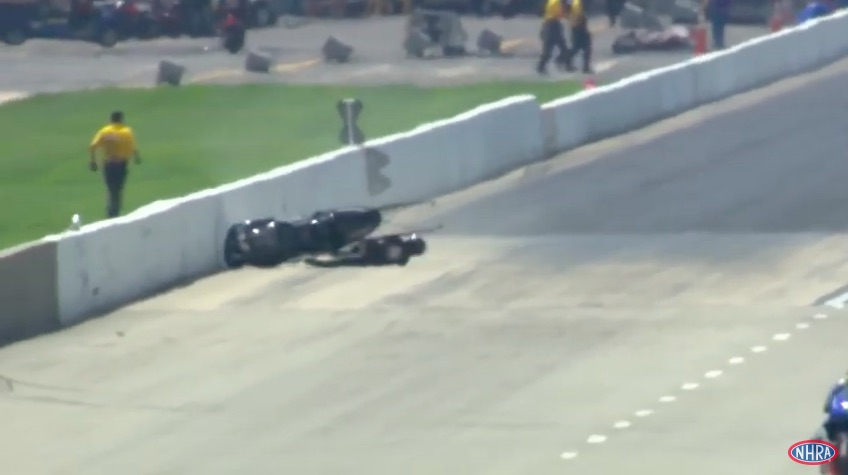 It was the most crazed, carnage filled race of the 2019 NHRA Mello Yello season yet. The NHRA Rt66 Nationals had everything from dramatic wins to multiple fiery engine failures and even what you are about to see below, a pro stock motorcycle wreck. It is rare to see a pro stock motorcycle crash. It is a once-a-season thing or less. Many times any incident with a bike comes in the form of a brake failure and a trip into the sand. Here, though? It was a totally different story.

On a weekend where she made her first career 6-second run, won her first career round of eliminations, and seemed to be growing in confidence by the minute, Jianna Salinas found herself tumbling on the asphalt shutdown area after coming off of her motorcycle in round two eliminations.

As you will see, Salinas’s motorcycle was drifting left and she hung with it for as long as she could. Perhaps a little too long. Unable to get the motorcycle straightened out, she hit some of the foam timing blocks and then that’s where the real problems started. In trying to get back into the lane where she started the motorcycle became upset and then rotated onto its side, sliding on the foot peg before ultimately throwing her off.

You will see her hit the ground, roll and slide, and then pop up after gathering her wits. She was very frustrated by what happened but we were all very happy that she was in one piece. Her dad sprinted the whole length of the track to get to her where the Safety Safari were checking her out and making sure that she was ok.

This was a wild one.