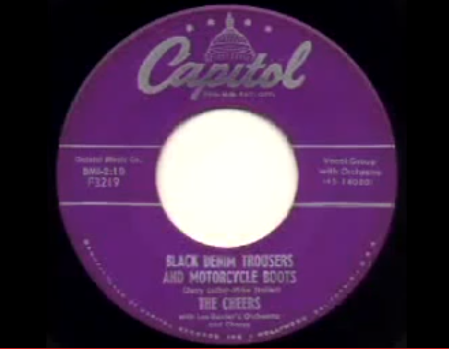 The Cheers were a hit making group in the mid-1950s and one of their most famed songs is the one we have chosen for today’s BS Daily Tune-Up. “Black Denim Trousers and Motorcycle Boots” was released in 1955 and shot right up the charts, peaking at #6. The song is super catchy and also caught the public’s interest because it was the first song that was really about a group that lots of people feared during that era…bikers.

The quick song tells the tale of an unnamed biker who is obsessed with his machine and not so obsessed with his girlfriend Mary Lou. There are some great lines, but we dig it when the singers talk about his, “hunk of ‘sickle that took off like a gun…” Stuff doesn’t work out so good for the biker or Mary Lou, sadly.