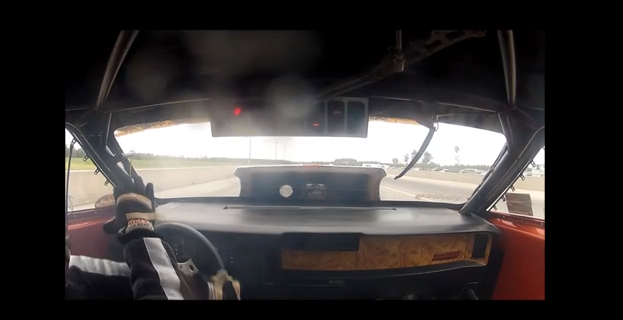 The really good drivers in drag racing aren’t necessarily the dudes who hit the tree for double oh lights every time. They are actually the guys who handle the car properly when the crap hits the fan at high or low speed. Drag cars by their very nature get pretty pissed about doing anything but going in s straight line, especially at the top end of the track where speeds are highest.

Racer Kevin Smith did one of the most masterful driving jobs on a drag strip you’ll ever see by getting a handle on his wayward Camaro. According to the description on the video, the car hit some oil that had been left by another competitor on the top end and slid our of control. Smith used every ounce of his ability to save the car and it worked.

You’ll see him, especially in slow motion, working the wheel back and forth as the car begins to yaw side to side. We can’t imagine what wen through his mind at the big end when the thing just went to the left and even with full right rudder was not coming back. He went on instinct and popped the chute which helped to straighten the car out, which he did the work in the driver’s seat.

If there were ever a class being given on how to save a drag race car from certain destruction and maintaining a cool head under pressure, this would be the lead training film. Great work by Kevin Smith!

Press play to see the most masterful driving job you’ll see all day!

Watch The Scary Jianna Salinas NHRA Pro Stock Motorcycle Crash From Chicago – She Walked Away Video: Watch A Dragster With Twin Blown Hemis Smoke The Tires All The Way Down The Strip At Beaver Springs