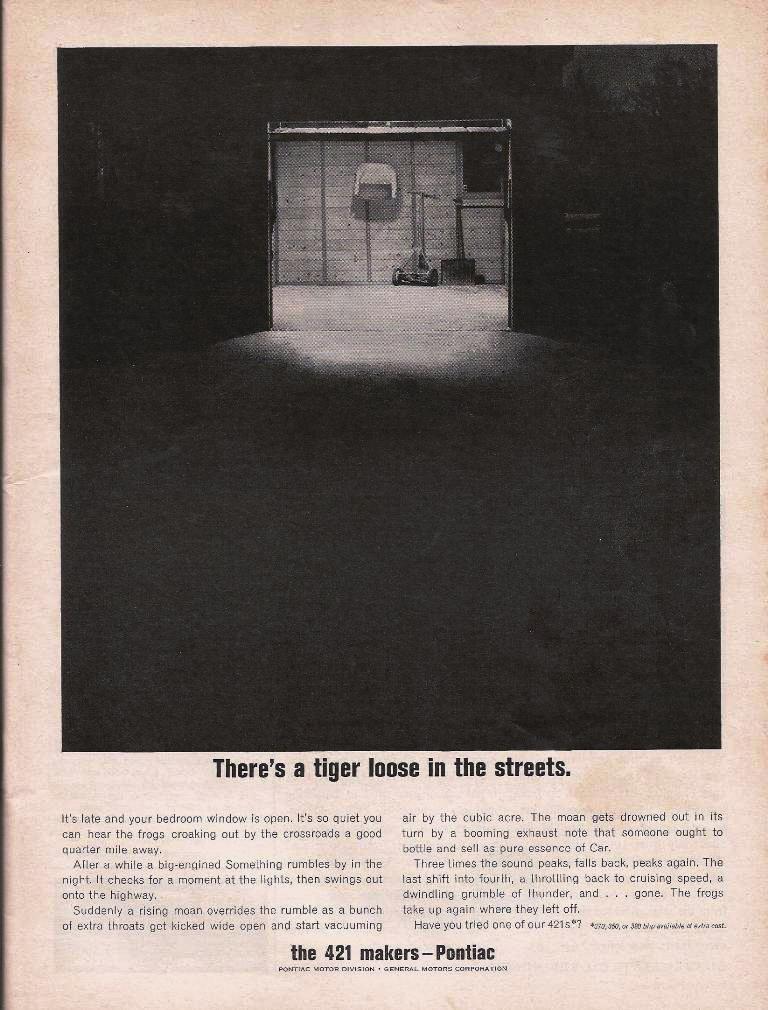 Pontiac advertising in the 1960s was driven by the colorful, creative, and brilliant Jim Wangers. This ad below which came from a 1964 copy of Road and Track magazine has his finger prints all over it. I think it is the greatest muscle car print ad of all time because other than seeing the word Pontiac at the bottom you have no idea who it is for and even then, not a single model is named…just the famed 421 engine. This ad copy does something that all good ad copy does, it takes us somewhere. Particularly, it takes us back to being a kid, lying in a hot bedroom at night during the summer with the windows open. The scene described in the ad would unfold with some frequency for me anyway because we lived about 1/4 mile from a main road through town, separated by a large field that was a working dairy farm for many years. Anyway, as a kid, I can distinctly remember lying there listening to the night and every now and again hearing someone in a hot car grabbing a gear or just burbling down the road. It immediately put me into a mode of trying to figure out what car it was, what color it was, what it must have been like to be driving it, etc. This ad takes that experience and builds it all into six perfect paragraphs. I always wanted to be driving that mystery car in the night…and I bet you did too.

The fact that not one model is mentioned in this copy and that the very last word on the page is Pontiac in fairly mundane print is just so damned good. The empty barn with the lonely glow of what looks to be a single light bulb burning behind a wall, the description of the sounds the engine makes when the driver romps on it, the shifting of gears. All soooooo damned good. The line about the “big engined Something” is beyond brilliant and it speaks to the fact that we live in a world that is so brutally dumbed down this type of ad copy will never roll again. Some soul sucking idiot in a corporate boardroom would shoot this thing down in a second. “Where’s the synergy? Branding? Social tie in?” They’d ask. Why isn’t there some bold colors and shiny things to be stared at? This ad speaks to an intelligent reader (which is why its a total miracle I understood it) and does so in an intelligent way.

There are ads which strike me as cool because they’re blunt. The famed “The Sleeper Awakens” big block Nova ad GM ran was cool and the 1964 Pontiac GTO ad that proclaimed the car to be a “device for shrinking time and distance” always makes me smirk, but the ad below is on an entirely different level. I think it was a one shot deal as well. I’ve never seen it again since spotting it years ago in this magazine and now heading back to share it with you.

I think I am going to sleep with the bedroom window open tonight…. 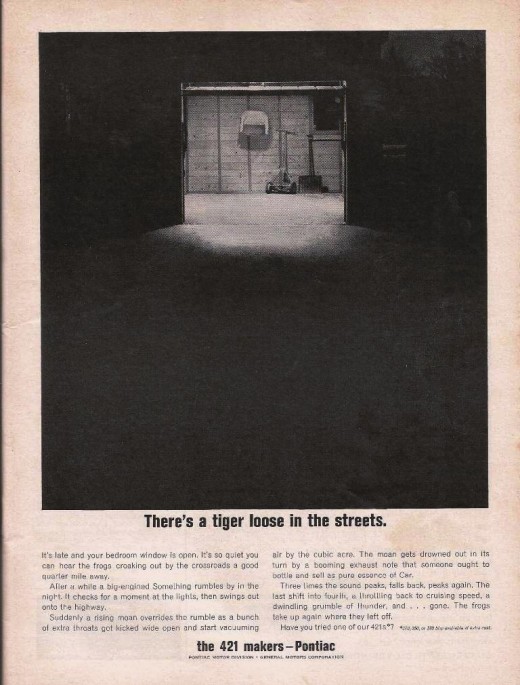 In-Car Video: Ride In A Sprint Car During A Heat Race At The Belleville High Banks In Kansas Watch A Drag Car Turn Into A Rally Car – New Video From Brazil, Car Travels Quarter Mile Into Jungle!