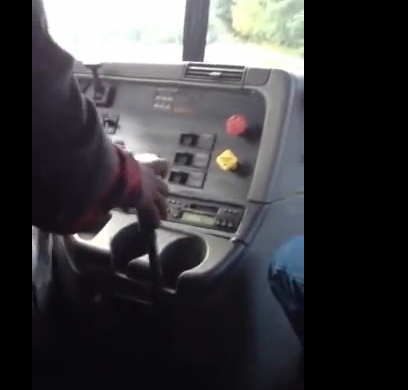 Wow. That’s the honest and true reaction we had to watching the video below. We’re sure that the comments section will erupt into an argument regarding the merits of a driving school instructor taking video of a guy literally doing his best to mangle the very expensive transmission in this truck versus teaching him correctly but if we had not seen this video we would not have believed it. Maybe it just never occurred to us that some people literally learn to drive a manual transmission in a big rig and there are lots worse ways to learn. In theory it should be easier to learn in a Kenworth than a Honda because torque. In practice there are lots more gears, a weirdo shift pattern, and the constant reminder that the vehicle is as long as a six story building and weighs way more than 50,000lbs.

The guy attempting to drive this truck is clearly still wet behind the ears in his truck driving career and the amount of grinding and searching for gears he does is downright amazing. This video may be more a testament to the robust nature of the transmissions that these trucks use versus the driver’s complete and utter lack of talent. We have all heard a driver grind a gear or two and let’s be honest, if you have been driving a manual transmission longer than this guy you have ground a gear or two yourself. It is the nature of the beast but this is freaking amazing.

If I were the guy who owned the driving school that this man is attending, I’d fire the instructor that posted this video in a heartbeat. It is bad for business to start with and then the fact that he was out on the public roads with an inexperienced driver who was clearly struggling and did literally nothing to help would not sit well with me. That does not even taken into account the damage and shortening of life inflicted on the transmission!

Normally with the Parting Shift we show off how good people are with a gear jammer. This week? NOT SO MUCH.

Pure Joy Video: Proof That An Autocross Ride Along With Brian Finch Is More Fun Than A Barrel Of Monkeys