An Odd Rod For Sure: This Twin Engine Citroen 2CV Was Built To Run Dakar! 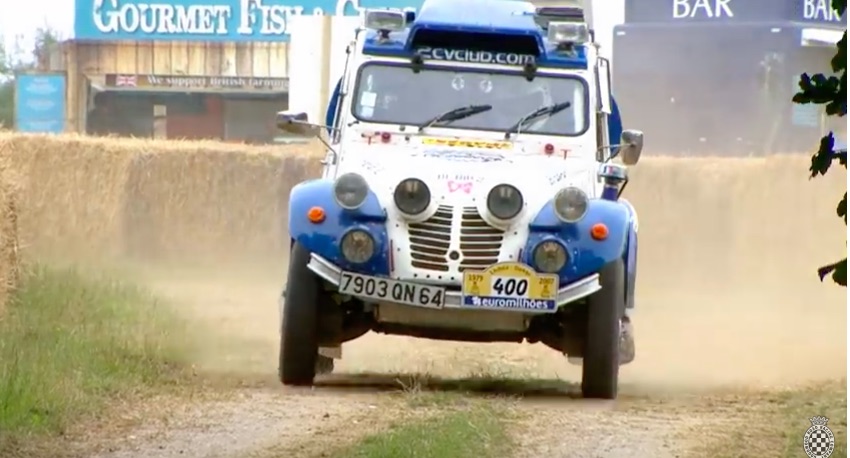 The Citroen 2CV is an iconic car in Europe, especially France. The thing played an almost Model T-esque role in putting people on wheels. It was tough, it was slow, and it was equipped with one of the more interesting suspension systems ever designed. Powered with a 600cc engine that made about 30hp stock, a 2CV was not known to be much of a hill climber or burnout machine. The engine was a twin cylinder design and the 2CV name stood for deux chevaux or in English “two horses”. The powertrain was laid out as a front wheel drive design. People did race and rally these things but not to freaking Dakar!

The rig you are going to see in action below was built in France and uses an engine in the front and back to make a four wheel drive configuration. Because the cars were front wheel drive, that part is kind of easy as the power unit and drivetrain are basically self contained. Horsepower total with the two warmed up little engines? About 90. That may sound sad, but remember that this thing weighs like 1,500 lbs.

The car debuted about 10 years ago and that’s also when it attacked the rally. We have no idea how it fared but we can say that the two guys racing this thing should have had statues made of them just for their courage alone. The car sounds surprisingly good for having two wheezing little engines.

How did the suspension work, we’d tell you but we only have about 50 years left to live. Someone already did the work on that topic so check it out out here.