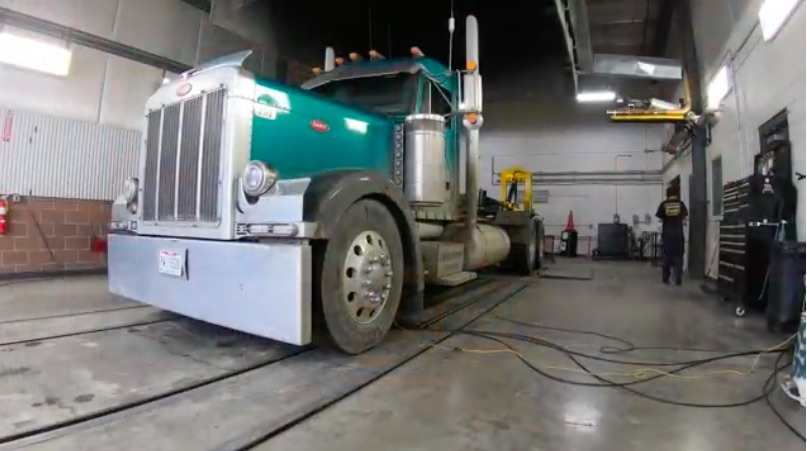 There’s just something about seeing a hot rodded big rig on the dyno that gets our dander up. In this case it is a Peterbilt at the famed Pittsburgh Power company in Pennsylvania. The truck has come into the shop because it has a weird hesitation when pulling hills and when the driver is working the rig with a load on its back. The owner wants to see if the guys can figure it out. Now, this is not just any ol’ Peterbilt. It is a working truck but one that has a modified Caterpillar 6NZ engine that makes 1,000hp at the flywheel and as you will see, when running correctly 2,600 lb-ft of torque at the wheels!

The cool part of this video is not just watching the dials spin on the dyno to illustrate the immense power that the truck is making but also seeing how the guys tackle and diagnose this issue. We learned stuff about diesel fuel systems and what some trouble signs are in terms of looking at information and diagnosing a problem can be.

The C16 6NZ engine in this truck has been hopped up with some marine parts like the camshaft and calibration. Those engines apparently are more aggressive and when combined with more fuel and more boost, this thing really sings. The boost is not crazy at 44psi but that’s still some pretty good push for the pistons.

The C15 6NZ is a 15.2L six cylinder which weighs some 3,000lbs. They had factory ratings up to 625hp so this engine had plenty of guts when it was new but it was nothing like the fire breather it is now. With a 5.4″ bore and a 6.75″ stroke, it is no wonder that it makes torque like a locomotive.

Video: Watching A Trabant Drag Race Is A Type Of Funny No Words Exist For There Once Were Giants: This 1950s Video Showing Off The New Caterpillar D9 Shows The Beginning Of Massive Earthmovers