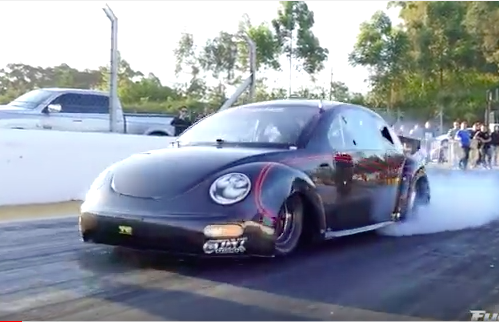 As far as cars that have historically “punched above their weight class” in drag racing, few can match the ferocity of the air cooled VW. Because they sold in such massive quantities around the globe there is still an amazingly strong contingent of air-cooled hot rodders out there and some of the hardest core live in Brazil. In this video you will be magically transported to Velopark in Brazil. This is a big racing facility with a drag strip, a road course, and other areas for vehicular fun. The focus of the video is the late model bodied Beetle you can see with the wheels up below. It is powered by an air-cooled VW engine that is both turbocharged and nitrous fed. Yeah, it is flat nasty!

The car makes a very smooth run to the tune of 7.66/196mph in the quarter mile. The team did a really nice job of gathering video of the run and we see it from multiple angles, including in-car. Equipped with a sequential, clutchless transmission, this driver knocks the gear lever multiple times during the run and he does so with the utmost precision. The title of the video proclaims this to be the world’s quickest and fastest air-cooled and we’re not sure if that is specific to the Beetle body style or what. There have been some six second air-cooled cars here in the USA and we’re not saying any of this to pick a fight we’re honestly not 100% sure what they mean when saying that.

What we do know is that the car is setup very nicely and the driver does a heck of a job keeping the short wheelbase flyer in line. Imagine a pro stock style class that allowed stuff like this? Cars that run middle to low 7s at over 190mph are entertaining as hell to watch! These guys have a great program and this is a great car.

PRESS PLAY BELOW TO SEE THIS BEETLE REALLY FLY –

Watching This Massive Excavator Crush A Pickup Like A Piece Of Cheese Is Amazing Watch This Scale Porsche Flat Six Fire Up And Make Really Wild Noises!