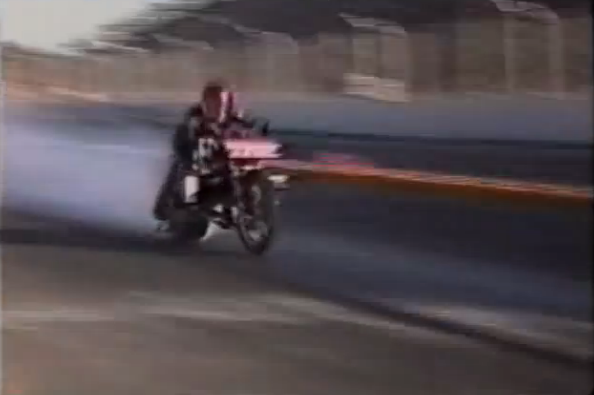 We’re still smarting from the news of the Michigan Madman’s passing several years ago. In his memory, here’s the best video you’ll ever see of EJ Potter atop his legendary V8 Chevy bike, known as the Widow Maker. This video was shot in the mid to late 1990s when EJ came out of retirement to ride his restored machine a couple times before it went into a museum. We’re pretty sure this is an excerpt from EJ’s self produced video that came out around 1999 or so.

You’ll see the bike run down into the deep 10s at nearly 150mph. We remember Potter saying that the speeds were down and the elapsed time was slower than he ran historically because, ironically, the traction compound applied to the track was working against him. Potter surmised that his roasting car tire on the back of the bike was turning that traction compound into a slick goopy grease. You’ll hear the engine bouncing off the rev limiter as he had to keep pedaling the machine because the motor was basically running away with nearly no load on it.

Potter ran down into the 8s at nearly 170 on his best runs in the early 1970s. This 10 second stuff was just a walk in the park for wily the old dude!

The V8 Lada Swap: The Russian Freakshow Is Now A Twin-Stick! Build, Break, Now Repair: Fixing Problems In A 1955 Chevy With Hoonigan (And Daughter!)