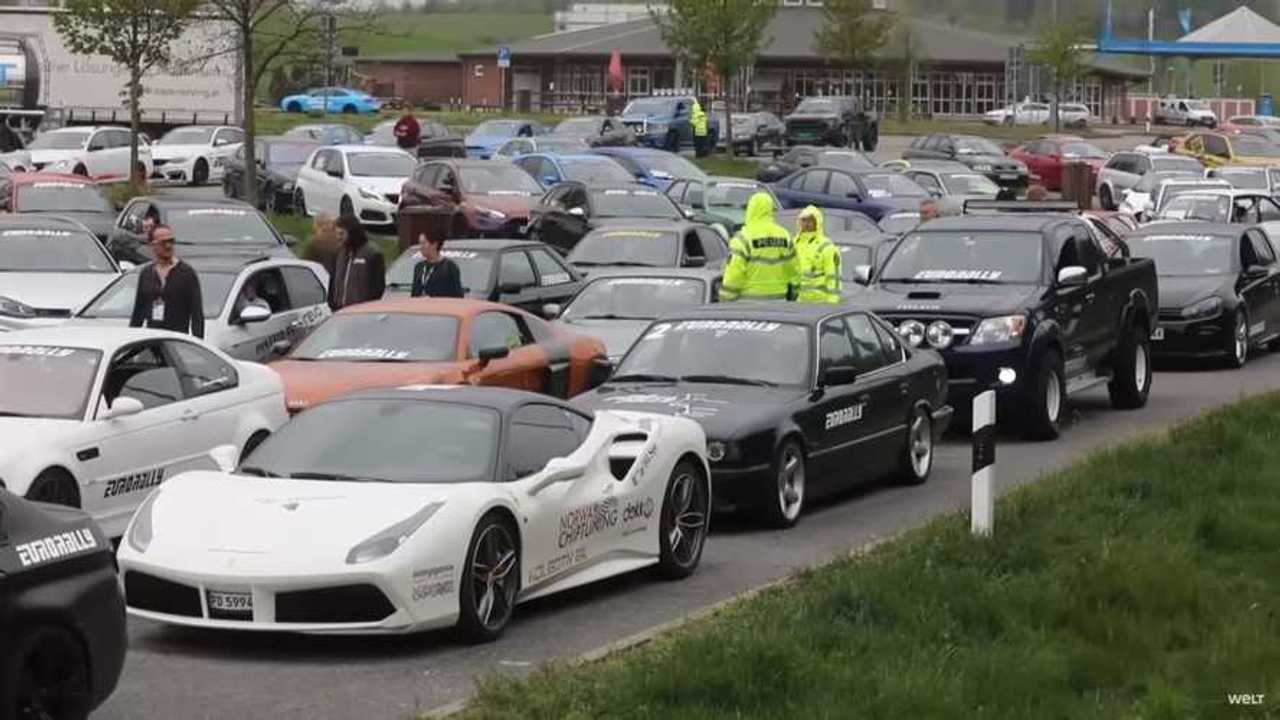 German police were not happy with the speed, even though the cars were reportedly on unrestricted sections of the Autobahn.

A week-long auto event called Eurorally kicked off May 1 in Oslo, Norway, with the final destination being Prague in the Czech Republic on May 5. Unfortunately, German police didn’t take kindly to rally participants scooting en masse down the country’s highways and corralled over 100 cars for illegal racing. German news source faz.net has the story, but as it’s an ongoing situation there are still quite a few questions as to exactly what is transpiring.

You Play, You Pay:

The simple version is upwards of 107 cars were stopped and occupants arrested for suspicion of illegal racing at an A20 motorway service area near the German town of Wismar. Police were notified by concerned motorists about a large group of sports cars traveling at speeds up to 250 km/h (155 mph). As is typical for such a cross-country event like this, the participating cars aren’t what you’d call subtle, so while the high-profile machines were stopped at the service area, police came in and shut everything down.

Here’s where it gets a bit more complicated. Apparently, many parts of the A20 Autobahn in this area are unrestricted, so the speed isn’t really the issue. The alleged crime here is whether the participants were actively racing, something which admittedly can be hard to prove. The faz.net report says police feel the Eurorally as a whole could be an illegal car race, which basically means any snazzy car with a Eurorally decal is a target to German authorities, regardless of speed or action. Eurorally has an Instagram hashtag with several posts and photos talking about the situation from the other side, with more than a few mentions about abuse of authority.

From what we can piece together in the more recent posts, nearly all of the Eurorally participants were caught up by German police but it appears authorities are now letting cars go at a rate of four per hour. Presumably that will alleviate the possibility of this being an illegal race.

Not unlike the notorious Gumball events, participants in the Eurorally pay a hefty sum to join the trip. There is no set route, but each night sees participants stopping in specific cities where extravagant parties await. On its website, Eurorally organizers specifically say it is not a competition. Unofficially, any time you get a group of high-end, high-power cars together, shenanigans almost always ensue. That holds true for a cross-country European tour or a Saturday night car meet in a U.S. suburb.