Vintage Road Test: The 1971 AMC Javelin on Car and Track 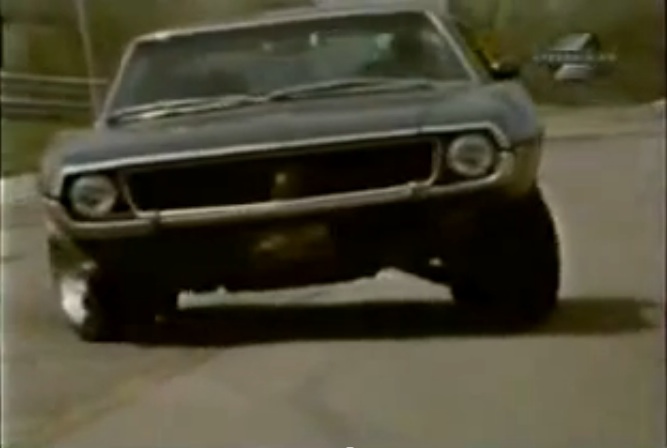 We love the old footage from Bud Lindemann’s Car and Track television show back in the late 1960s and early 1970s. The sweetest clips are from the road test thrashings they gave all the hot cars. In this case the test subject/victim is a 1971 Javelin with a 401ci engine and an automatic. Watching this baby work around the track, skid to a tire smoking stop, and wallow through the cones makes us smile. Especially when stuff like braking performance is mentioned. As good as American companies were at making them go back in the muscle car era, stopping was another story. The brakes faded to nothing in three stops and the thing took almost 210ft to stop from 70! Hang on kids, that could get ugly.

The “heavy duty” suspension allowed for “some” body roll. That’s the understatement of the decade. They nearly had to have the door handles rechromed from dragging on the ground but again, it is an apples and oranges comparison to look at a modern car and compare it to this stuff. Yes, it rolls like the Andrea Doria but for its time, this was hot stuff. Today, these cars are worth good scratch and many have been tuned up with bigger sway bars and spring/shock packages to make the most out of their capable chassis.

The 401 sounds great and the wheelman does a great job tossing the car around. He had the world’s greatest job back then! Hit the play button below to see a 1971 Javelin get worked until its tongue is hanging out! We’re fans of the ’71 and up AMX. The exaggerated kick ups in the front fenders and of course the 401 power make us so. They were cool cars during the waning days of the muscle car era. This video is really fun stuff.

2019 Buffalo Motorama Coverage: Here’s our Final Collection Of Images From The Show Exotic Dyno Video: Watch A Twin Turbo 12-Cylinder Ferrari Testarossa Engine Scream Its Guts Out On The Dyno