Radial Heat: Watch This Radial Engine Run On A Trailer And Nearly Melt Its Own Exhaust Off! 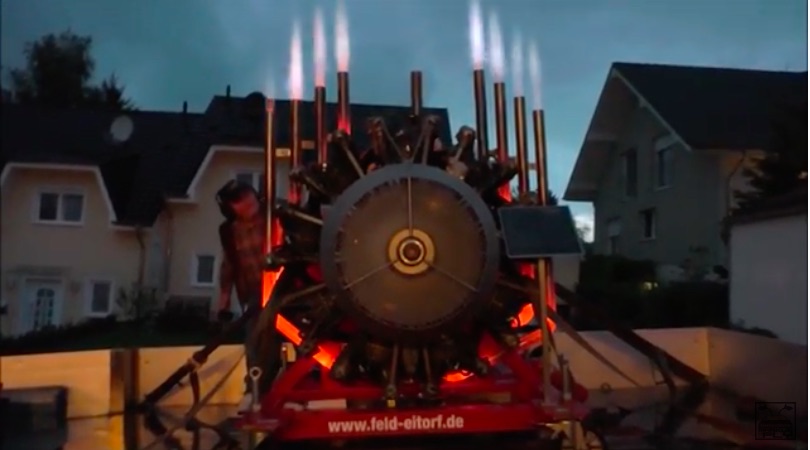 This is an awesome video for a couple of reasons and the first one is the setting. It looks like this guy has started a radial engine mounted on a trailer in the middle of a residential neighborhood. As we learn, though he’s at some sort of a small fair as we can see a carousel and other stuff from different shooting angles. There’s the noise of the nine cylinder Antonov engine, which is the crackling staccato that radial engines are known to make, the header flames that look so cool at night and then there’s the glowing exhaust.

We’re going to have to call upon the vast knowledge of the BangShift readership on this one. We’re not sure if the safety orange colored exhaust pipes are because of vastly retarded timing or if they are because radial engines never run with full exhaust and this is just a consequence of lots and lots of hot gas passing through  a relatively small and pretty long set of pipes. Any time we have seen radial engines on airplanes the have had little stubby exhaust on them, not a full set of pipes like this.

In nitro burning cackle cars guys pull loads of timing out to get the big flames out of the zoomies. As this thing is not running on nitromethane fuel and is just barfing fire out of the exhaust while trying to melt the pipes off the engine, we’re guessing that it’s not a timing situation but just good ol’ combustion. What say you?

Press play below to see this dude run a radial engine at night and make fire!

So Much Win: The Sniper EFI 4150 Dual Quad Setup Is Easy To Install, Tune, and Love Watch This 100ci, Turbocharged, Bonneville Four Banger Make 400+ Horsepower on The Dyno