Is The Zephyr Mini Super Charg’r The Most Hilariously Bad Bolt On In Automotive History? 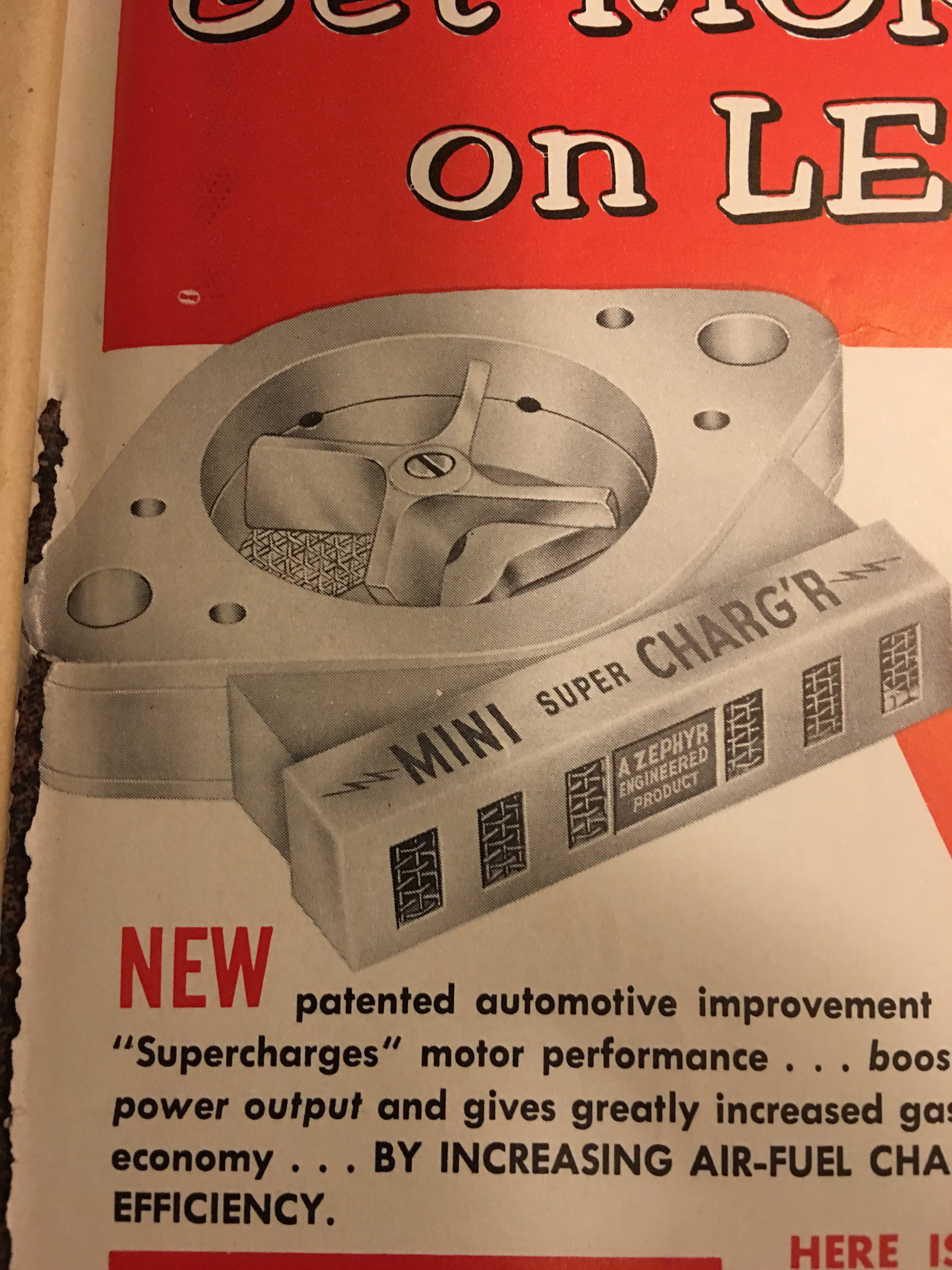 Through virtually every moment of automotive history there have been people selling a miracle product that would make a car function better, improve fuel economy, defy the laws of physics, and only take 10 minutes to install. From stuff that rearranges the molecules in your fuel, to stuff that somehow plugs into your 12V power port and straightens out the electrons so your junk runs better, it is all kind of funny. Perhaps nothing can top the gem we have for you here, though. Called the Zephyr Mini Super Charg’r is is essentially a massive bolt on vacuum leak with a couple of spinny things in the middle to make your junk run better.

We had never heard of this miracle until we were flipping through the pages of a 1955 Speed Mechanics magazine only to find the ad for it proudly occupying the entire interior back cover of the magazine. We have a bunch of photos below so that you can see the whole ad and chuckle with us but this thing is officially insane and not in a good way.

Basically a carb spacer with a gaping hole in the side, this thing defines the philosophy that “lean is mean” because it is essentially a massive vacuum leak with the aforementioned “impeller” in the middle secured with a screw that is virtually guaranteed to fall out and then mangle the innards of your engine. Judging by the advertising, these things sold pretty well for a time because the they can be found over a two year stretch in the mags before disappearing completely. The “improved” version used a remote style breather for the fresh air to the drawn in. It appears to have been far more restrictive than the original version which had a piece of mesh on the side to prevent a rodent or a finger from entering the impeller zone.

Not only were these things kind of dastardly in the technical department, they were also pretty expensive. The four barrel carb version of the device is listed for $15.95 in 1955 money. Amazingly that is $141 today! If we can give the hucksters today credit for anything it is controlling the price of their crackpot inventions.

Hey, we realize that lots of engines back then were not in tip top tune and that there were likely some that were really pig rich at all times but this thing still strikes us a completely insane. We wonder how much the idle speed was up when this sucker got bolted on and how many mechanics had to tell their unsuspecting customers that the source of their currently bad running car was the miracle product they bolted on! 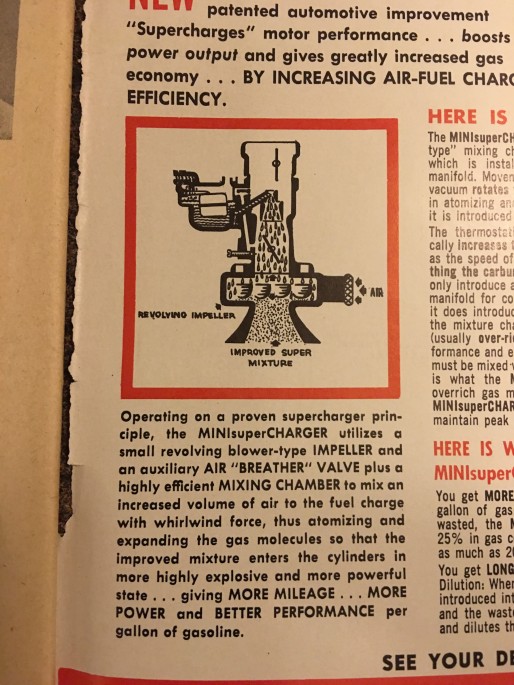 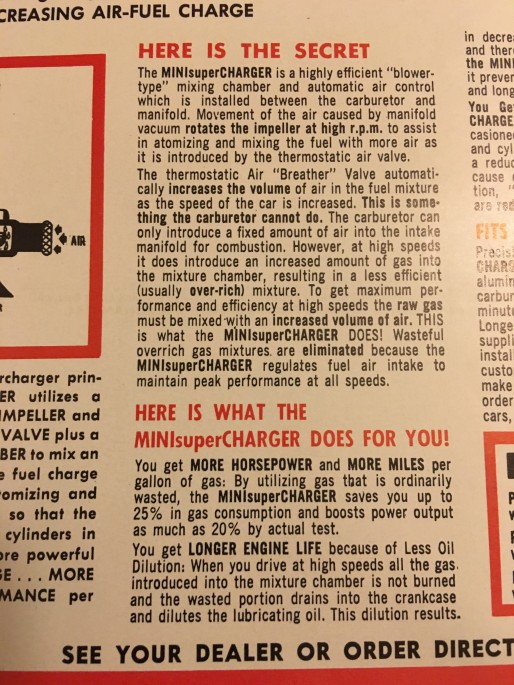 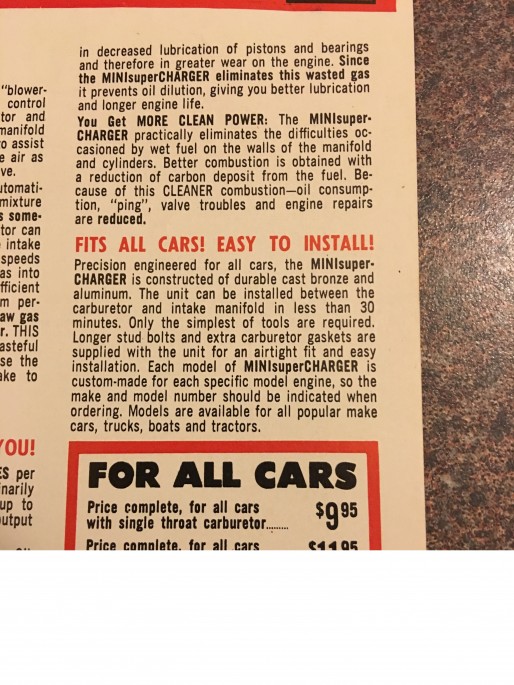 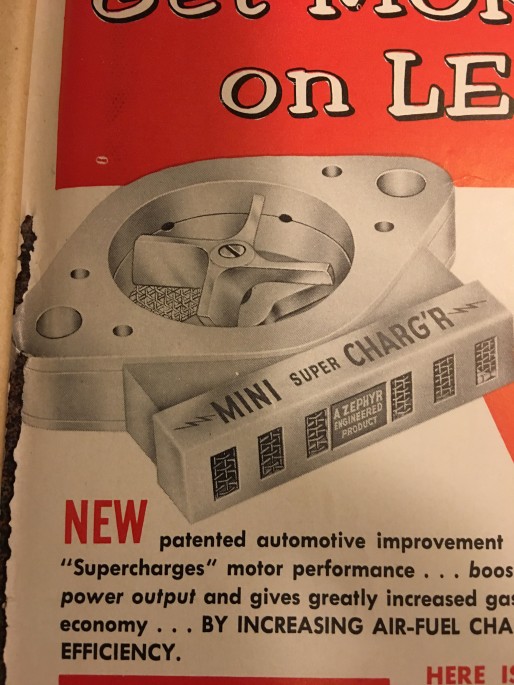 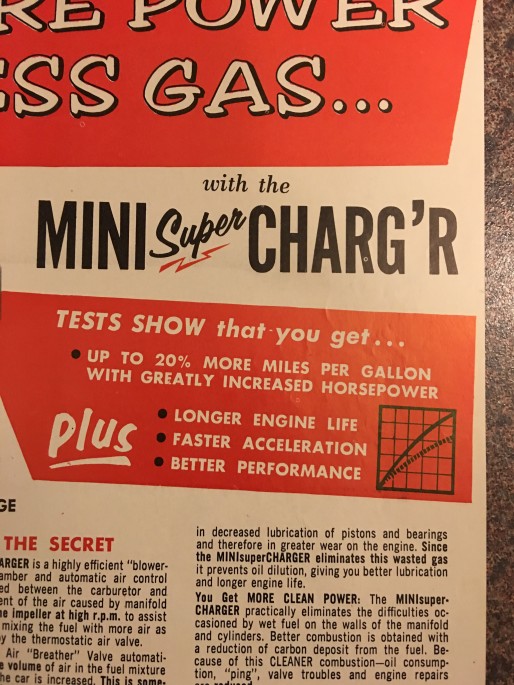 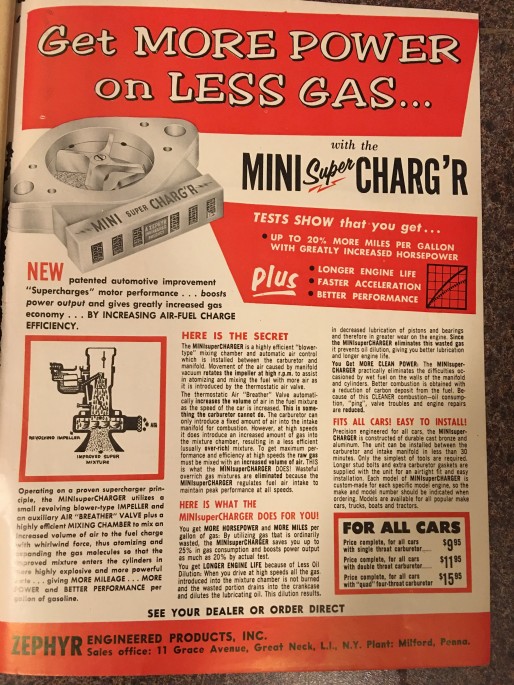 Watch This Massive English Road Locomotive Make A Tight Turn And Power Up A Hill…In Traffic!