In-Car Video: Watch This Wild 10-Car Crash On The Nurburgring Caused By Oil On The Track 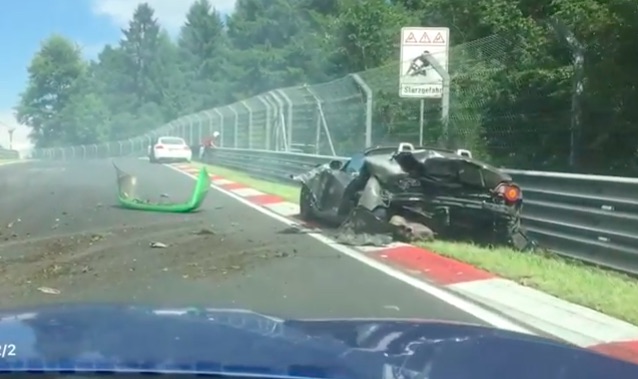 There’s no question that many people dream about ponying up the money necessary and taking their car for a joyride on the Nurburgring. There’s not competition license necessary, no proof of competition driving history, and you don’t even need to be in a high performance car. Literally anyone who can pay the money (which we understand is short) can hammer the gas on the many curves of the Green Hell. This video shows a massive 10-car pileup that was reportedly caused by a supercar leaking oil on the track at the spot where all hell breaks loose. We understand that everyone lived through this deal but there were some heavy duty injuries.

How bad was this deal? Reports state that more than 30 rescue personnel responded to the scene and they employed all manner of ways to get people out and to help. Perhaps the most amazing automotive imagery from this whole calamity is the diversity of the cars you’ll see involved. Everything from little stuff like a VW Golf to the upper echelons of the super car world. That’s the ironic part about this. No matter if you are in a $25,000 car or a $340,000 car, running over oil at high speed and trying to keep your car in one piece is nearly impossible, especially on a track that has no runout.

We’re not saying the Nurburgring experience stuff is bad. We’d love to go do it. We are saying that this is a very clear illustration of just what CAN happen when a load of cars get bunched up and the unexpected rears its ugly head.

It’s Tops! This Historic Sales Video For The Allis-Chalmers HD-19 Crawler Tractor Is A Fun Watch